A Chautauqua Serenade to Some Early 20th Century Ancestors 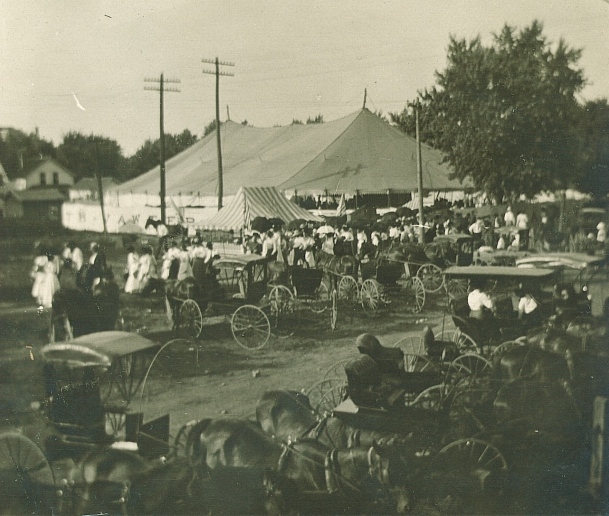 Scene from a typical Chautauqua gathering in rural America c.1911. The newly invented automobile was not yet common in the rural Midwest so there was a mixture of automobiles and horses outside most Chautauqua grounds, but each had their own parking area. (Photo courtesy of the Redpath Chautauqua Collection, University of Iowa Library.)

About a year ago I was contacted by Jay Sherwood, a retired school librarian and teacher who hails from Pittsburgh, Pennsylvania, but who has lived in Canada for the past 40 years. He had some startling information for me about my Aunt Grace (1891-1972).  It seems he came across a reference to her in a caption for a gravestone on a post I’d done months earlier which mentioned Grace had been a pianist, and he wanted to talk with me about that.

Jay is a published book author who’d been searching the internet for “Grace Desmond” (my aunt’s maiden name), in hopes of learning about a woman of that name during the early 1900s. The Grace Desmond he was looking for had traveled the Chautauqua circuit in 1911 with his grandmother, Ruth Bowers, bringing musical culture to the Midwest in Iowa, Minnesota and Missouri, well before the advent of radio and TV.

Ruth, a young renowned violinist from Erie, Pennsylvania, and C. Edward Clarke, “the Canadian baritone” and rising star on the Chautauqua circuit, were two of the three artists who made up the troupe known as the Clarke-Bowers Company. The other, it seems, was my Aunt Grace.

Who would have ever known?!

The troupe needed a classical pianist and Clarke recommended Grace who had performed with him and the Riner Sisters at the end of their Lyceum circuit in the winter of 1911. All the members of the Clarke-Bowers Company had been schooled by the best teachers of the day in their respective musical fields. In Grace’s case, that included William Hall Sherwood, founder of the Chicago Piano School.  In the 1920s it was renamed the Sherwood Community Music School and it’s still in operation today as part of Chicago’s Columbia College.

Grace had also been under the tutelage of Fannie Bloomfield-Zeisler  described by Zeisler’s biographer Diana Hallman as “a virtuoso revered for her musical intellect, expressivity, bravura and scintillating touch, in a wide range of concert repertoire.”  (To understand just what all that means you can listen to a few classical Zeisler pieces–pieces undoubtedly taught to and played by Aunt Grace as well–by  clicking right here.)

Sure, we Desmonds knew Aunt Grace could play with exuberance when she sat down at the piano bench. We heard her play the Notre Dame fight song with gusto many a time—in homage to the school her kid brother (my dad)  graduated from in 1931. We had no idea though, she was such an accomplished classical pianist who had this fascinating musical past.

What a world Jay has opened to us! 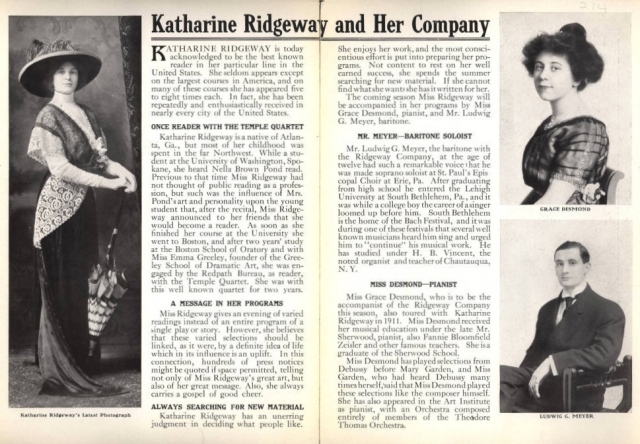 Typical of programs distributed by the Chautauqua organization  to promote their entertainers. (Photo courtesy of the University of Iowa Libraries.)

The program booklet above  was produced by Chautauqua to promote Grace’s 1912 tour with Katharine Ridgeway, a renowned reader and elocutionist of the day; and Ludwig G. Meyer, baritone. Grace’s professional biography on the bottom of the second page reads:

Miss Grace Desmond, who is to be the accompanist of the Ridgeway Company this season, also toured with Katharine Ridgeway in 1911. Miss Desmond received her musical education under the late Mr. Sherwood, pianist, also Fannie Bloomfield-Zeisler and other famous teachers. She is a graduate of the Sherwood School.

Miss Desmond has played selections from Debussy before Mary Garden, and Miss Garden, who had heard Debussy many times herself, said that Miss Desmond played these selections like the composer himself. She has also appeared in the Art Institute as pianist, with an Orchestra composed entirely of members of the Theodore Thomas Orchestra.

In the process of researching his next book—the story of his grandmother’s days on the Chautauqua Circuit—Jay of course, came across Aunt Grace’s name and face a number of times as well, and he’s been most gracious and generous in sharing his findings.

“Don’t you think our faces are our fortunes? The Happy Clarke-Bowers Company.” Ruth, Clarke and Grace share a little frivolity between performances. (Picture courtesy of the Ruth Bowers Photo Collection.)

Ruth Bowers was on the Chautauqua and Lyceum circuits from 1910 to 1912.

From his grandmother’s personal collection of memorabilia and through his own research, Jay’s unearthed posters, programs and photos; as well as ads, musical reviews and newspaper articles from across the Midwest and western United States.

Ruth brought a camera with her on her Chautauqua tours in 1911 and 1912. Her photographs, including several with my  Aunt Grace, provide rare behind the scenes views of life on the road as a Chautauqua performer.

Clearly, Ruth and Grace were ahead of their time as two independent liberated young women in an era when females simply didn’t travel unescorted on their own–especially for the purpose of entertainment. They are genuine examples of young women who paved the way for all the other young women who came after them some 60 or so years later.

One of the most heartwarming parts of this story, though, is that Ruth and Grace didn’t simply perform together—it seems they became very, very good friends as evidenced in their writings to each other in letters and postcards they exchanged during and after their traveling days.

Boyfriends, gossip, and annoying brothers—timeless themes of concern to young ladies of any era—are all a part of the first person writings Jay found in those documents between Ruth and Grace—artifacts that were discovered in a cousin’s attic decades after they were penned.

The Riner Sisters who entertained on the Chautauqua circuit with my aunt, Grace Desmond, in 1911. (Photo courtesy of the University of Iowa Library Chautauqua Collection.)

There were other friends too, from the summer of 1911–like Tommy Weatherwax from the well-known Weatherwax Quartet who took a liking to Grace, and the Riner Sisters who were also on their entertainment circuit. Recently, I came across a newspaper article from 1915 that told of Grace attending the wedding of Jessie Riner, her fellow Chautauqua performer.

Jay’s been working on his book, Chautauqua Serenade for some time, completing research in his native Pittsburgh; in Iowa where a considerable portion of the Chautauqua archives he was searching are located; and even here in Illinois at the Abraham Lincoln Presidential Library in Springfield. It was my good fortune to be able to meet him in person last spring when he conducted an extensive research tour through the eastern and mid-western United States in search of material for this book.

I even had the honor of previewing a copy of Jay’s first draft—a gift to his mother (Ruth’s daughter) on his mother’s 90th birthday last fall. Now he’s fine-tuning his work and is talking with publishers about its publication so everyone can read and learn about this unique era of American history from the early days of the last century.

Jay’s even managed to get me to do a bit of my own research on Chautauqua as well, when I can fit it in—an experience that’s been both enlightening and entertaining.

In the process, I’ve learned  that  my Aunt Grace also performed throughout the west with the famous Katharine Ridgeway on a Lyceum circuit in the fall and early winter of 1912. Colorado, Utah, California, Oregon, Washington and Montana were among the many states they traveled, to perform for appreciative audiences.

Though most of what I’ve learned from Jay about Grace’s career relates to the summer of 1911 when she toured with his grandmother, I’ve picked up information that refers to other circuits she played on as well.  My hope is that with further research, I’ll be able to obtain a more complete picture of Grace’s professional career as a classical pianist in the early 1900s that I can share here in the months ahead.

So, between a subscription to an historical newspaper database and encouragement from my new friend Jay, I’ll definitely be learning and sharing more about Grace and her life on the road as a Chautauqua performer in the early 1900s. It’s a story that simply must be told!

So thank you Jay, for finding Grace (and me) on the internet via GeneaJourneys. I would never have known about this fascinating facet of Aunt Grace’s life if you hadn’t reached out and shared it. 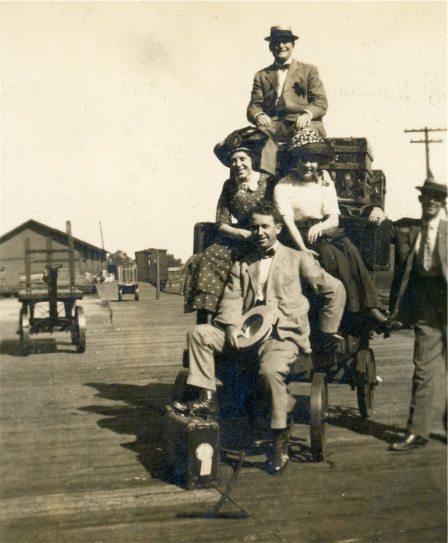 “Our baggage has arrived.” C. Edward Clarke, front, Ruth Bowers, middle left. and Grace Desmond, middle right, of the Clarke-Bowers Company on a baggage car at a train station in Iowa in 1911. Lecturer James O’Donnell is on top, and an unknown performer is on the right. (Picture courtesy of the Ruth Bowers Photo Collection.)

General information on the Chautauqua period in the early 1900s can be found in these and other books available through your library or local bookseller:

The Romance of Small-Town Chautauqua by James R. Schultz, University of Missouri  Press, 2002

The Most American Thing in America: Circuit Chautauqua as Performance by Charlotte M. Canning, University of Iowa Press, 2005

I’ll be adding Jay’s book, Chautauqua Serenade—a more personal account of his grandmother’s experience on this traveling circuit as a classical violinist–to this list closer to its publication date.