Turning of the Centuries in Chicago

Two large black-and-white photos hang in my dining room where I spend much of my time these days on all things genealogy—writing blog posts and magazine articles, completing assignments for my Pro Gen class, and conducting my own family research.

The 1909 photo is the one that caught my eye because that was the very year my father was born, right here in Chicago, where this classic photo was taken. Just glancing at it—which I seem to do multiple times a day—offers a glimpse into what life must have been like in this bustling metropolis for the Desmond family at the turn of the last century.

At first glance, these photos from an earlier era taken just seven  years apart, almost seem identical,  but a closer look reveals just how distinctly different they are. 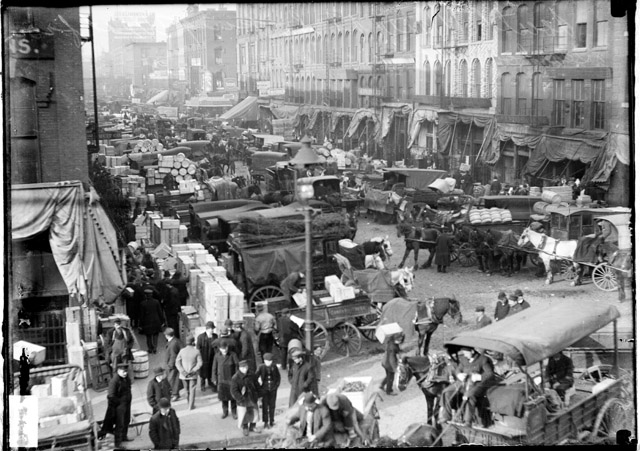 The 1902 image shows a Chicago street market where tarp covered, horse-drawn wagons are backed up to store fronts as merchants load and unload their goods. Crates, barrels and boxes litter the sidewalks. Blurred images of apron clad merchants—intent on business—wait on customers or rush past each other as they head toward the next task at hand.

The 1909 image, taken just seven years later, is also a Chicago street scene, but one that presents a totally different intersection of both place and time. Close examination reveals far more than just a busy intersection in another turn-of-the-century business district. Its the modes of transportation displayed in this visual, that provide telling testimony to the changes that have taken place.

There in the midst of that 1909 Chicago intersection—with no street signs, or traffic signals to guide them—are horses, carriages, trolleys, automobiles, and wagons of every kind, laden with ice, lumber and barrels of goods, all making their ways to their next deliveries. Hundreds of people on foot and on horseback, surround and intermingle with this variety of vehicles that transport people from one place to another.  It’s a view of congestion and unbridled chaos, where people, animals and an array of vehicles—rush toward, around, and into each other as they attempt to reach their personal destinations. The gray, hazy scene suggests heat, soot and distasteful odors permeating the air that the viewer can almost feel and smell.

That was Chicago in 1909, the year my father was born–on  the cusp of  a whole new era in the history of transportation. Who knew, in 1902, just  how much things would change in seven short years? One can only imagine what the people in these photographs would think of those same Chicago intersections today.

…where pre-occupied workers, much like in their own day, dart carelessly in front of vehicles known as “buses” and “cabs” as they hustle off to an “el” or “subway” for a  meeting on the other side of the “Loop”…

…right there–in  the same places they once stood–on  the now, neon lit, streets of Chicago more than a century later.

It begs the question:  Who and what will be on those busy Chicago street corners a century from now?  People from a continent away stepping out of flying cars, for a quick business lunch with a client?

Only time will tell…

This entry was posted in Chicago History, Photo Stories. Bookmark the permalink.

10 Responses to Turning of the Centuries in Chicago