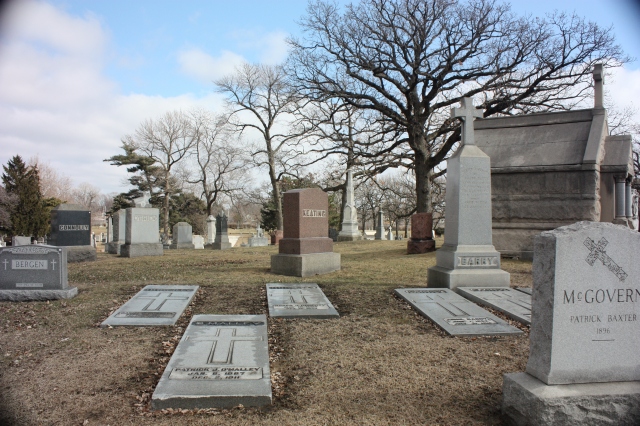 The rose colored monument (center) marks the family plot of Thomas Keating (1832-1915) at Mount Olivet Catholic Cemetery, Chicago, IL. This great-grandfather, a builder and mason who learned his craft in his Irish homeland, superintended the construction of a number of well known structures in the city of Chicago after the Great Chicago Fire of 1871. Among them: The Chicago Times newspaper building; the mansion of muckraking journalist William F. Storey, publisher of  The Times;  the Kankakee Insane Asylum; and and a number of churches.

Early on in my ancestor sleuthing, after initial success in finding a few family graves, I began to get a little cavalier about my finds.

You know the drill:  choose a name; get a death certificate; drive to the cemetery; stop in at the office for a map; head over to that section of the cemetery; then hoof it across the rolling expanse of well manicured lawn to look for the grave of interest.

Well, that’s not so hard, I thought back then. One bit of information begets another, and with a little perseverance you’ll find what you’re looking for, right? 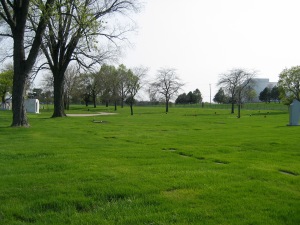 Disappointment ~ No marker for Grandpa Donar who was buried somewhere in this part of All Saints Cemetery, Des Plaines, IL in 1929.

Delighted to have located my paternal grandparents’ graves on the south side of Chicago, my confidence was bolstered to seek out the grave of my maternal grandfather, Peter Donar, which I knew was on the north side of town. With map in hand, I set out for a little tombstone reading in the proper section of All Saints cemetery:  “Hmmm…  Should be around here someplace…  Can’t seem to find him… Where is he?…  Is this map right?… There aren’t many markers in this area…  Wait, what?… Could it be there’s no gravestone?…”

BINGO!  My hypothesis was confirmed the following Monday during a call to the cemetery office.  (Clear sign of a budding genealogist.)

Lesson learned?  Just because you have a paper document proving that a particular person is buried in a particular spot in a particular cemetery doesn’t mean there’s proof above the ground in the form of a marker or gravestone.

I asked myself why this grandpa, who died in October 1929 didn’t have a marker.  The answer? The economy, of course!  It was the eve of the Great Depression. The Donars were poor. He was probably lucky to get a spot at all in this potter’s field, which appeared to have an extensive area of unmarked graves in the back part of the property. No hills, trees or curvy paths for Gramps.  He couldn’t afford the prettier parts of this burial ground.

What disappointment.  After all my efforts to track down his grave, all I had was a piece of paper to prove that somewhere in this vast expanse of unmarked ground my grandfather was laid to rest. I felt cheated.

I moved on. Time to find Peter’s father, my great-grandfather William Donar, who was buried in Calvary on the city’s north side in 1899.  Oh, and just to keep things interesting, it seems his son William Donar,  (yes, same name), was also buried there a few decades later.  Off I went to obtain a map of the grounds. 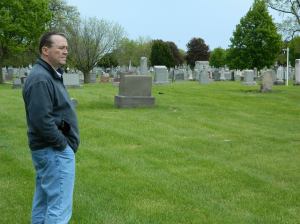 Mark Biallas looks over a carpet of unmarked graves at Calvary Cemetery, Chicago, Illinois, where his wife’s great-grandfather, William Donar, was buried in 1899.

Not again…really?  No headstone?  And his son has no headstone either?  What gives?  The cemetery office was still open so I stopped in to see if I could get a little direction. After a quick look at their records I was told that the graves of both Donar men were located in Section “P” over by the fence. “And, by the way,” I was further informed, “the son is buried right on top of his father.”

What?  I was appalled! Can they do that? Again, genealogy neophyte that I was at the time, I didn’t realize this was a common burial practice during a certain era. Experienced grave hunters wouldn’t have been surprised to hear such news.

Lesson Learned? Make no assumptions. It’s really okay to question things you don’t understand.  If records indicate something that seems a bit out of the ordinary, it may very well be true. But, ask anyway just to confirm it.

Last year I decided to try to find the grave of my beloved Aunt Grace who I realized was buried in Holy Sepulchre, the same cemetery as her parents, and according to the records, apparently right next to them.  That shouldn’t have been a big surprise, I just hadn’t started looking for her yet. I’d never bothered to examine the graves adjacent to my grandparents to see if there was anyone else in the vicinity I might be related to, so of course, I didn’t realize Aunt Grace was buried right there. Had I bothered looking around,  I would have found her, right?

You see, Aunt Grace’s husband, James Holland, beat her to the grave by some 30 years and, as it turns out, Grace’s name had never been engraved on their double marker. Why not?

I thought about the circumstances of her life. She’d been a widow for 33 years.  She’d had one child, a son, a Jesuit priest who, at the time of his mother’s death in 1972, was the pastor of Holy Family parish on the south side of Chicago. I imagined him conducting the services for his own mother at the funeral home, celebrating her funeral Mass in his church, and officiating at her graveside service. It seems, though, that he dropped the ball when it came time to get the other half of his parents’ stone engraved upon his mother’s death. My cousin, Fr. Frank Holland, S.J., (1919 – 2012), the only child of Grace Desmond and James Holland. Frank was the pastor of Holy Family Catholic Church in Chicago at the time of his mother’s death in 1972.

Perhaps due to his duties as CEO of a thriving Chicago parish, my cousin Frank, simply never got around to it. Thus, while Aunt Grace does have a stone and is buried next to her husband, that marker does not proclaim that she once lived on this earth and these are the dates she was alive.  Again, disappointing, but at least I know where she is.

Lessons learned? Once you verify a grave site as belonging to someone on your family tree, peruse the immediate area to see if other nearby graves may belong to a family member as well. You just may literally strike pay dirt! In addition, if you come across a double marker that’s partially blank, talk to the cemetery office to find out just who, if anyone, may be buried there. You may discover a relative you never knew you had.

Another early discovery that I’m happy to report did not result in a family find, occurred during my quest for great-grandparents Jeremiah and Mary Desmond, whom I later learned were not even buried in this state. I was a genealogy newbie at the time and hadn’t done all my homework, so I didn’t realize that fact as I eagerly sought out the gravestone of another couple bearing their same names.

I found the marker I was looking for in Chicago’s Mount Olivet Cemetery — one row over and about eight graves down from the resting place of Al Capone — the most notorious gangster in Chicago history who terrorized this city in the early 1930s!

Lesson learned: Research  thoroughly before spending the time, gas and mental energy seeking the grave of someone who may not even be related to you.

So glad I was wrong about the burial spot of those great-grandparents. I’m sure they’re resting much more peacefully in upstate New York right where they belong.

My final surprise actually had its beginnings over 20 years ago, well before I had any interest in genealogy and ancestor hunting. It began during the funeral procession for my father-in-law, Karl Biallas, on the ride through the cemetery gates.

The massive Lawder monument I’d passed so often over the years, completely unaware that THIS was the final resting place of my uncle Ralph Desmond (1894-1951), a man who died before I was even born.

I remember looking out the car window and seeing a very tall monument located in the shape of a simple cross bearing the name “Lawder” in big block letters on all four sides of its base. “Lawder,” I thought. That name seems so familiar.” Out of sight, out of mind, the funeral procession moved on.  We had a family burial to attend to.

Fast forward a couple of decades. By then I’d learned that “Lawder” was indeed a name that belonged on my family tree. After my usual sleuthing and searching, I found myself six months ago standing at the base of the massive monument I’d passed 23 years earlier at the entrance to Holy Sepulchre.

The discovery?  My uncle, Ralph Desmond, a man who had died before I was born, was buried right there under that cross, on the corner, under the stop sign, at the first main intersection of the cemetery. Couldn’t possibly miss him.

The grave of Ralph Desmond, an uncle I’d never met, was hidden in plain sight, right before my eyes!

There he was in his wife’s family plot along with a dozen other Lawders – a family he had married into some 90 years earlier.  I had no idea back in 1989 as I passed that monument on the way to my father-in-law’s burial, that I was also passing the grave of my own uncle, a man I had never met.  It seems the secret of just where Uncle Ralph ended up was buried right before my eyes — I just didn’t know it.

What I’ve learned since my first endeavors as a cemetery sleuth has proven thrilling, disappointing and mystifying in turn as I successfully found some graves I was determined to find, discovered others where I never expected to, and was led to others by sheer luck. And though I may not always have found what I was looking for, I always found something worthwhile to add to my family story.

So, for those just beginning their cemetery sleuthing I offer this bit of advice: remain curious, be open-minded and just keep hunting. You never know what — or who — will turn up as a result of your detective work.

(Let’s just hope it’s not the remains of someone like Al Capone!)

Despite the presence of this marker at Mount Olivet Cemetery in Chicago, this is no longer the final resting place of Al Capone. Many years after his death, his body was secretly transferred to Mount Carmel cemetery, in west suburban Hillside.