Right Before My Eyes

How many times have you heard a fellow genealogist remark with dismay that something they’d long been searching for had been in their possession all along?  They just didn’t realize it ‘til they put the pieces together.

Something similar happened to me just last week. Only mine wasn’t a fact—it was a face. Two faces to be exact. 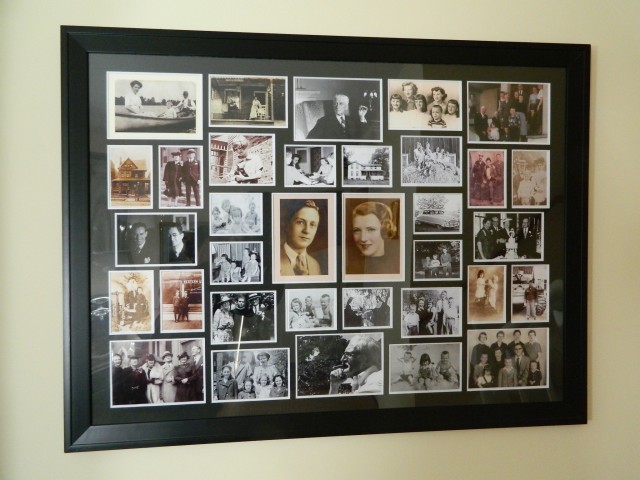 As keeper of the Desmond family photo albums for the past few decades, I’ve been  intimately aware of each and every photograph covering 150 years of family history that’s resided within those pages—not only who is in each photo, but where and when each photo was taken. I’ve even produced a photolog for this collection of 500 photos so I could digitally access each and every one of them at the touch of a keystroke.

Sometimes though, I think we genealogists get so caught up in researching, obtaining, analyzing, verifying and cataloging data and documents, it’s easy to lose sight of what’s right before our eyes. 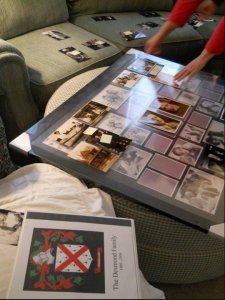 Over a year ago I began  selecting and printing some of my favorite family photos for a photo montage I wanted to display in the living room. Sample photos were selected, sized and assigned a spot within the frame. Somehow though, life got in the way, and I never got around to actually ordering or printing the final copies I wanted to use.

“Enough procrastinating!” I told myself last month. “I’m finishing this thing.” So for the next two weekends my husband Mark and I worked diligently to correct, crop, print, mat and plan where each of those 32 vintage photos would be inserted into our 30” x 40” frame.

We did it! Our project was completed. What a relief!  No longer would we have to trip over this massive frame with post-its all over it reminding us of our lack of commitment in getting the job done. Our artwork was hung and accolades were graciously accepted from visitors who cared to comment. From the moment that frame went up, it looked right at home—like it had been resting against that wall for years.

Then one day early last week, something about it caught my eye.  Two somethings, actually—two different photographs of two different little girls, from two distinctly different eras.  Yet, there they were—placed, it seemed, by happenstance—right next to each other.

The first, a sepia-toned studio shot, was taken in 1914.  It’s a photo of my mother, Dorothy Donar, with dark hair in a white dress standing on a curved wooden chair posing with her older brother, George. 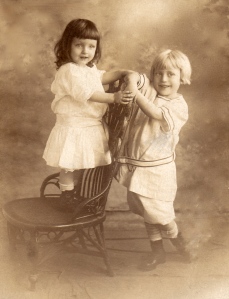 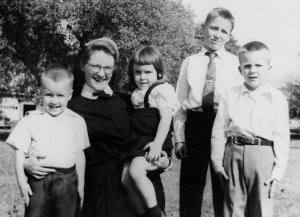 Right next to it in that photo montage hanging on my living room wall is a black-and-white snapshot taken 42 years later in 1956. That photo, which includes five of the eight Desmond siblings, was taken at the convent when my sister, Diane, was a postulant with the Sisters of St. Joseph.

The little girl my sister is holding in that picture is me.

I’ve probably viewed each of these pictures separately hundreds of times over the last several decades, but I’d never looked at them side-by-side or ever thought to compare them.

I guess it was serendipity. If I hadn’t decided to create this family montage or hadn’t chosen to include those two particular photos in it, I might never have noticed how startlingly similar those two little girls, from two different eras actually appear.

Now to examine photos I have of my two daughters to see which, if either, are clones of their mother—or even of their maternal grandmother…

Yet, more sleuthing to pursue….

This entry was posted in Photo Stories and tagged Dorothy Donar, George Donar. Bookmark the permalink.

13 Responses to Right Before My Eyes