Posted on May 27, 2019 by Patricia Desmond Biallas

(This post originally appeared on GeneaJourneys on October 26, 2011. It’s being republished today in honor of Memorial Day.)

Sometimes when that happens though, I have a mini-revelation. And that’s when I tell myself “back off, STOP, put that thesaurus aside.”

Because every once in awhile I realize I don’t need many words to tell my story.

And that is the case today.

Following are some of my favorite photos taken a few weeks ago at Arlington National Cemetery, Arlington VA.

I post them in honor of all veterans, known and unknown, who gave their lives for our country who are buried at Arlington and other cemeteries across this land; in graves that are marked or unmarked. 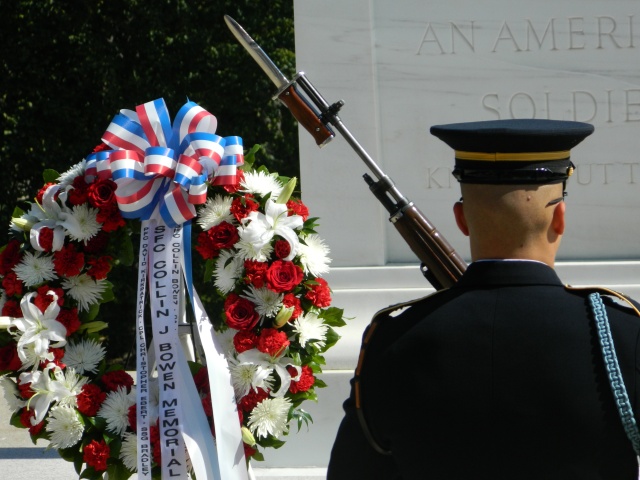 Born and bred on Chicago’s south side, he lived through headlines proclaiming the beginning and end of two World Wars; the invention of the automobile and airplane; the beginning and end of Prohibition and the Great Depression; the criminal misdeeds of  infamous mobsters  Al Capone and  Johnnie Torrio who shared his city’s streets; the “Space Race” which put American men on the moon; and the hippies and flower children of the 1960s (one of whom was his own son.)

Gone now for nearly half a century, he never witnessed the invention of a “cell” phone (what’s that?), a personal computer (huh?) or an automatic garage door opener—all of which his Desmond descendants use on a daily basis today. 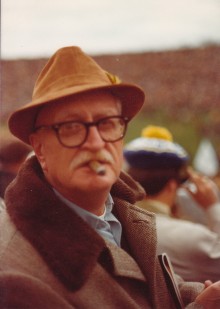 Dad at his beloved Notre Dame for a football game in October 1976–forty-five years after he graduated.

Dad attended Loyola Academy of Chicago (class of ’27),  where one of his classmates, Robert Ryan, went on to become a Hollywood icon.   Like his brother before him (Owen E. Desmond II, class of ’24), Gerry graduated from the University of Notre Dame (class of ’31). His great-grandson (Colin Vaughan, class of 2020) will graduate from Notre Dame next year– precisely 89 years after Dad did.

Gerry married my mother, Dorothy Donar, a Chicago model and northsider, whose family moved to Chicago from New York City in 1916. Family lore holds that they met on a blind date, and the rest (for them, at least) was history. They wed on 1 December 1934 during the depths of the Great Depression.  (which may explain why no photos exist for that seminal event in their lives.)

Dad was 26 years old when his first child, Barbara Desmond (1936-2019) was born, and 44 years old when I, his youngest, arrived in 1953. Seventeen years and six more kids between Barbara’s birth and mine may also explain why he was often mistaken by my teachers (and many others) for being my grandfather.

Dad was renowned for his subtle humor, gentle demeanor and the King Edward cigars he picked up at the neighborhood liquor store which he and his sons worked part-time at throughout the 1960s.

His taste for a stogie likely came from his own father, Owen Desmond, who was rarely photographed without a cigar in hand.

But back to that April Fool’s Day birthday…

We kids loved playing tricks on Dad on his special day.

As a child, I remember giving him inexpensive toys and gifts —marbles, a bottle of bubbles, and a game of “Pick Up Stix”—all of which would inevitably be returned to me for my entertainment pleasure. (Very thoughtful of him.)

My siblings and I did get into some trouble one year on his birthday, though, when we were a bit older.

In the Desmond household, the birthday celebrant had the pleasure of choosing the dinner menu, so Dad always selected steak. He was none too happy during one birthday feast however, when he salted his steak only to realize that sugar had been placed in the salt shaker by some unknown youthful prankster.

To this day I’m still not sure which one of his kids was responsible for that April Fool’s Day trick—no one ever owned up to it. Result? We were ALL grounded for a day or two.

I can assure you that never happened again.

And that’s no foolin’!

Dad, cigar in hand, with  Patti Desmond, his youngest child in the late 1970s.

Her parents are Will Cowen and Erin (Desmond) Cowen; and her maternal grandparents are Donna (McDaniel) Desmond and the late Gerald J. Desmond (1946-2017). Rylee is also welcomed by her big brother, Ethan, who was born 24 Nov 2015.

Welcome to the world, Rylee (and to the Desmond family).